The Case for Los Angeles as a Bicycling City

Los Angeles gets a bad wrap when it comes to bicycling. Rumor has it that the center of car culture crushes all transportation alternatives. Yet, over the last 15 years, I have both participated in and watched with joy the growing bicycling movement in Los Angeles. To that end, I make the argument that because conditions in Los Angeles have traditionally been so harsh towards bicycling, a growing, committed, passionate and creative group of individuals and organizations are working to change the status quo.

Here’s my six reasons to watch Los Angeles as one of the most exciting North American Cities transforming a 20th century car culture into a more sustainable, 21st century bicycle culture:

1. CicLAvia is HUGE!: CicLAvia has captured the imagination of Angelenos! As candidate for Mayor Eric Garcetti said, it’s a “game-changer.” This event brings Angelenos together in a beautiful way that reimagines our public space (hear some of my thoughts as I biked the first CicLAvia). The momentum continues to increase with more and more CicLAvia’s each year, and related open streets events just outside of LA: 626 Golden Streets, Long Beach Beach Streets, Santa Monica Open Streets, etc.

2. Capital of Social Rides: While CicLAvia is the mega-ride, on any given night in Los Angeles, there are countless groups of Angelenos riding together in a vast configuration of themed rides. It started with Midnight Ridazz, a fun, party-like alternative to Critical Mass (which has gone strong in LA since 1997). I’ll never forget participating in the “Heavy Metal Ride,” my first Midnight Ridazz ride after living in New York City for a few years. Midnight Ridazz got so huge that the founders decided to “open-source” the rides. This inspired a whole new generation of folks to lead rides. These rides no only allow participants to experience their city in a whole new way, they also build community. This community is now a movement! Here’s a video of the Emerging Sustainability Ride I helped lead with Ride-Arc a few years back.

3. Complex Ecosystem of Organizations and Leaders: This growing movement consists of talented leaders and organizations working together for change. Staring with the LA County Bicycle Coalition, the county-wide advocacy organization I helped launch in 1998, there’s now a movement of organizations and leaders working together for change including: CICLE, Women on Bikes SoCal, LA Streetsblog, BikeSide, #bikeLA, Charlie Gandy, Ride-Arc, LA Street Summit, Biking in LA, Gary Rides Bikes, Art Cycle, the Bike Film Festival and CicLAvia. Together, they have worked on campaigns to increase bicycle funding, stripe Sharrows, create Bike Boulevards, create a new Bike Plan and the and secure funding from the 30/10 plan to implement $40 billion dollars of Measure R funds. There are artists like Cache’s murals and those “Caution Please Pass with Care” signs that appeared a few years back.  Here’s a short Bike Angeles documentary that includes me sharing a few thoughts on the growing bike movement. There’s plenty of other people and organizations also working for a more bike friendly LA and I’m grateful for their efforts. Since I wrote this blog post, even more initiatives: Vision Zero Los Angeles, Vision Zero Alliance, LA Great Streets, Mobility Plan 2035. Investing in Place is also doing a lot of good work around transportation equity and the Shared Use Mobility Center released an Action Plan for Los Angeles.  Lastly, the Goldhirsh Foundation supported a report called Urban Mobility in the Digital Age. 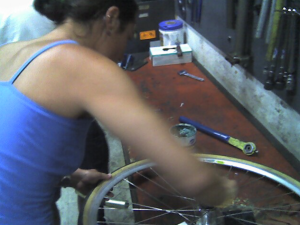 4. Epicenter of Community Bicycle Repair: While I could have included community bicycle repair spaces in the above ecosystem category, their dramatic growth in Southern California warrants their own category. Starting with the Bike Kitchen launched in the late 1990’s at the LA Eco Village, there are now, according to someone I spoke with, something like 14 Bike Kitchen-like spaces in Southern California. Whether its the Bike Oven on the Eastside, Bicrowave on the Westside, the Hub in Long Beach, these spaces not only provide a space for people to learn how to fix their own bike, they build community in the process. These are the engines getting people to ride. By the end of the 20th century, every neighborhood had a gas station. In my lifetime in the 21st Century, I can’t wait to see a community bike repair space in every neighborhood! It’s also super excited to see the Bike Kitchen’s founder, Jimmy Lizama, launch Re:Ciclos, bringing cargo bikes to Los Angeles! 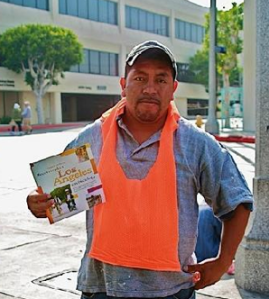 5. A Diverse Movement: One of the community bicycle repair spaces is an inspiring spot near MaCarthur Park called Bici Libre. Many folks who use the space come from working class, immigrant families. These “Invisible Cyclists” are more engaged in the bicycling movement than any other city I know. Starting with an outreach project to understand the needs of working class, immigrant cyclists many years ago under the lead of the Los Angeles County Bicycle Coalition, the more recent effort to engage these cyclists initially came under their City of Lights Program (which has since become its own fiscally sponsored organization known as Multicultural Communities for Mobility). Working in collaboration with other organizations serving immigrant communities,  Multicultural Communities for Mobility engaged these mostly Spanish speaking cyclists into the movement for change in Los Angeles.

6. The Public Health Connection: Los Angeles has pushed the boundaries of who is a bike advocate. One of my favorite programs is one launched by the Los Angeles County Department of Public Health, called the PLACE program. The program invested a good chunk of change in several communities, both to develop more bicycle friendly policies and create innovative demonstration projects. A related initiative is the Living Streets Initiative.

I could go on about other things that excite me in Los Angeles, but I wont. Does Los Angeles still have a long way to go to become a bike friendly city? Of course! Does it get as much attention as Portland or New York City when it comes to bicycling? Not yet. What do you think?

As a consultant, I’m pleased to have served many of the organizations leading this movement. These include facilitating retreats for the LACBC, the Bike Kitchen, leading trainings for City of Lights and Bick Digna, fundraising for Bikestation, helping plan the first Bike Summit and riding my own bike around town on a regular basis, and longer bike tours every now and then.

For more reasons why Los Angeles makes the cut as a bike city, see Ted Roger’s recent post on his Biking in LA blog regarding the recent inclusion of Los Angeles on the list of bike-friendly cities for the League of American Bicyclists. See the LA Streetsblog article as well. What’s funny is when I started writing this post, I didn’t even know that Los Angeles recently gained this bike-friendly status. I just wanted to write this because I’m here in Kansas City leading another Winning Campaigns Training for the Alliance for Biking and Walking and I felt the urge to make the case for Los Angeles. This just goes to show that there is so much going on every day in Los Angeles that it’s hard to keep up! May the bicycling movement grow exponentially over the next 15 years. 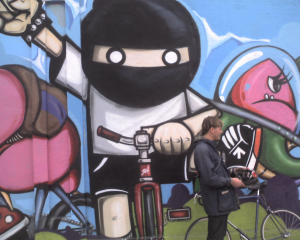 Ron Milam, MSOD, works to transform the Pacific Coast into a sustainable region through leadership and organization development for collaborative change initiatives. Since 2005, Ron has served over 150 clients as an organization and network development practitioner.
View all posts by Ron Milam →
This entry was posted in Sustainability and tagged Community, Leadership, Sustainability. Bookmark the permalink.