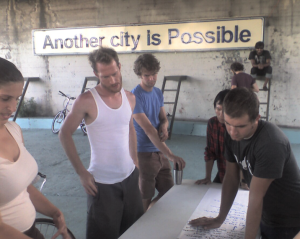 Soon after launching my consulting practice, my good friend Jimmy Lizama asked if I could facilitate the upcoming retreat for the Bicycle Kitchen, a community bike repair space he and a group of other folks launched a few years earlier. The year was 2007 and this retreat was the first retreat I ever facilitated in Los Angeles as a consultant. The experience played a pivotal role for both me and the Bicycle Kitchen.Back in 2007, the Kitchen had grown dramatically in a short amount of time. Their leadership recognized they needed to make several big decisions in order to keep the momentum moving forward. Rather than attempt to make these decisions over the course of their regularly scheduled meetings, they made the wise decision to give themselves the needed space and time to discuss these issues over a two-day retreat.

Day one went smoothly as we modified and refined the organization’s mission and values.  The second morning proved far more challenging as we discussed formalizing the organization’s leadership structure. What I thought would be a relatively easy discussion about creating a board of directors turned into a complex dialog that went over the original time allocated for this topic, without any clear consensus emerging. 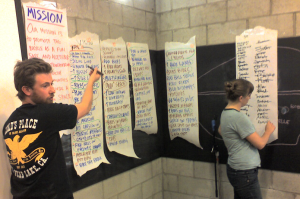 I had pulled out everything in my facilitator’s toolbox and was stumped.  I didn’t know what to do (no big surprise since I didn’t have a ton of facilitation experience back then).  I took a deep breath.  I looked around the room and decided to ask if anyone had any suggestions for how we could resolve this issue.  Silence.  I waited (experienced facilitators embrace silence so I had some good gut instincts there).  A few seconds later, one person raised his hand (the talented Somer Waters) and suggested a “go-round”, which would provide an opportunity for everyone to share their thoughts on the discussion at hand.

In an instant, my uncertainty was transformed into a new course of action.  I refined the idea before we started, asking everyone to keep their comments brief and also comment on the three specific issues where the group lacked agreement.  I quickly drew a three-column chart so we could graphically visualize their responses.  To my surprise, after we finished the go-round, 80% of attendees agreed on the same course of action!  Within minutes they formalized a proposal and unanimously agreed to it.  Later that day, they elected their first formal board of directors.

Ten months later, they submitted all of their paperwork to become a non-profit. A year later, I facilitated another retreat for the Bicycle Kitchen (the 1st and 3rd picture in the blog post are from the 2nd retreat, the 2nd and 4th are from the 1st retreat…yes, that’s Jimmy attempting to hula hoop upside down in the 4th picture during a spontaneous play time). Five years after the first retreat, the Bicycle Kitchen is a thriving nonprofit organization that recently purchased its own building!

No doubt the Bicycle Kitchen has succeeded for a variety of reasons: the passion of their founders, the hard work of their volunteers, the important service they provide to help people learn how to fix their bike and a whole bunch of other factors. I also like to think that the time their leadership invested in retreats played an important role in helping the organization succeed. 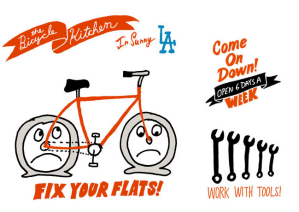 For me personally, the experience taught me to trust the wisdom of groups to solve their own problems.  It helped me learn that an effective facilitator uses a variety of processes and tools to help groups reach consensus. It helped me realize that I love serving the leadership of organizations as a facilitator, especially during retreats where critical decisions they make help chart a positive course for the organization’s future.

If you haven’t already done so, check out the Bike Kitchen’s new space. Whether you need to fix a flat, or build a bike up from scratch, they will help you out. And if you’re with an organization that needs to make some big decisions, I encourage you to convene your leadership and go on a retreat.

Ron Milam, MSOD, works to transform the Pacific Coast into a sustainable region through leadership and organization development for collaborative change initiatives. Since 2005, Ron has served over 150 clients as an organization and network development practitioner.
View all posts by Ron Milam →
This entry was posted in Facilitation, Retreats and tagged #Nonprofit, Board Development, boards, Clients, Facilitation, Leadership, Retreats, Strategic Planning. Bookmark the permalink.
Loading Comments...
%d bloggers like this: